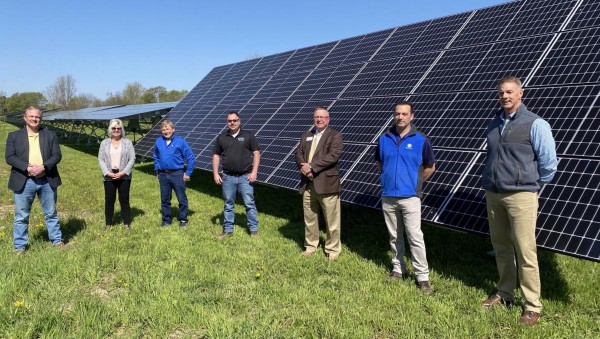 WATERLOO — Covington Box and Packaging Inc. is saving money and the environment with a field of solar panels covering 1.4 acres outside its factory in Waterloo.

“First and foremost, it’s helping the environment,” company president Tony Fifer said Wednesday. “When you talk about cutting into one the largest expenses we have, being electricity … from a business point of view, it also made sense.”

Covington showed off its solar-energy system Wednesday on a day when the sun was unobstructed by a single cloud. Guests included the system’s vendor, Covington’s banker, a U.S. Department of Agriculture official and a Town of Waterloo representative.

In four rows of 10 arrays each, the system stretches some 500 feet wide across a space at the southwest corner of the Covington Box plant on U.S. 6.

“That solar field is providing 100% of our electrical needs in this 200,000-square-foot facility,” Fifer said.

The system prevents 395 tons of carbon dioxide per year from entering the atmosphere, he said. That leaves 294 acres of forest free to absorb carbon dioxide from other sources.

“That blew me away,” Fifer said. “What a way to help the environment — and the dollars that we’re going to save on the expenses, we can reinvest into the company … the employees … the community.”

“It looks phenomenal. … It’s great for your business. It was a great deal all around,” said Eric Straeter of Ag Technologies. He added, “You guys were the most professional I’ve dealt with.”

“He really did a great job of educating us, making it simple for us to understand,” Fifer said about Streater.

Covington Box spent $925,000 on the solar field, with the help of a grant from the Rural Energy for America Program awarded by the U.S. Department of Agriculture.

“We wouldn’t have done this project if it wasn’t for the help. It meant a lot to us,” Fifer told Michael Dora, Indiana director for USDA Rural Development.

Dora said his agency helped Covington Box with its application and advised on an audit to reduce the factory’s energy load.

“The government understands, this administration understands, that we’re using more and more electricity all the time. We’re not building any more generation plants, other than solar or wind,” making solar energy essential to the growth of U.S. manufacturing, Dora said.

Farmers State Bank assisted with financing. Fifer said the bank has been “a funding source and a partner to Covington Box for 20-25 years.”

Straeter said his product’s SolarCam name comes from its cam-lock system that allows the owner to change the angle of the solar panels four times a year.

Wednesday, Covington Box’s panels were laid back at 12 degrees from horizontal for the summer season.

“It’s worth 11% or 12% more energy,” Eric Straeter said about the adjustable panels. He said they achieve the same efficiency as panels that track the sun from east to west during the day, but with less wear on the equipment.

Covington Box produces containers for the food industry, including Miller Poultry and New Horizons Bakery in Steuben County, and the automotive industry, as well as cremation and funeral supplies.

Covington Box General Manager Mike Rogers said the solar system’s activity can be tracked by an app on a smartphone or computer.

Fifer said he and Rogers are co-owners of the company with Dean Kelly and Glen Kelly.

“The hope is — more and more people jump on stream and do this.”

This article originally appeared on kpcnews.com